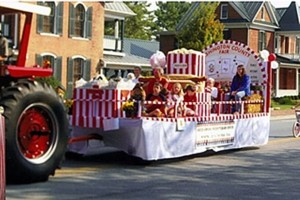 Washington County Fairground, Inc. will sponsor the 70th annual parade to be held on the Saturday before the Fair week kicks off. The new date is September 7th, 2019 at 10:00 a.m. on main Street in Abingdon, Virginia. The theme for this year’s parade will be: “LET THE GOOD TIMES GROW”  All clubs, civic organizations and groups are invited to participate. Complete entry form and send to:

We ask that you complete our entry form to help us in organizing this year's parade.
ALL ENTRY FORMS MUST BE COMPLETED AND RETURNED BY SEPTEMBER 5, 2019, TO GAYLE LAWSON, PARADE CHAIRPERSON, 16293 Chase Lane, ABINGDON, VIRGNIA 24210.Email: gaylelawson@comcast.net
ENTRY FORM

The Parade will begin at 10:00 a.m. at Frost Funeral Home and proceed down Main Street, ending at the former Southern States building. Entries and participants will assemble on Main Street near the funeral home. Parade Chairperson and others will be on hand to assist participants with placement, lineup and preparing for judging of floats.
ALL FLOATS/PARADE ENTRIES WILL BE JUDGED AT THE ASSEMBLY AREA PRIOR TO THE PARADE.

It is important that you be at the parade assembly area by 9:00 a.m., so that judging and line-up will be completed by 10:00 a.m. in order for the parade to start on time. Further information and instructions may be obtained by calling (276) 623-9330.

ALL ENTRIES MUST BE APPROVED BY THE PARADE COMMITTEE
PRIZE MONEY AWARDED TO 1ST, 2ND AND 3RD PLACE ENTRIES
DISPLAYING THE PARADE THEME
FIRST PLACE $300.00
SECOND PLACE $200.00
THIRD PLACE $100.00
NO ENTRY FEES; HOWEVER, DONATIONS ARE APPRECIATED !
IMPORTANT NOTE: DO NOT THROW CANDY –
If your. Further information and instructions may be obtained by calling Gayle Lawson (276) 623-9330. 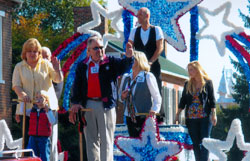 ALL ENTRIES MUST BE APPROVED BY THE PARADE COMMITTEE

There will be members of the Parade Committee on hand to assist you in the area that you will need to be, and we would be honored to have you and your group, float, etc., as a participant in this year’s parade.

IMPORTANT NOTE: DO NOT THROW CANDY — if your group has candy, some one must walk the parade route and hand it out.

There are no upcoming events at this time.