The Washington County Fairground is a non-profit, non-stock organization with its officers, directors and committees serving on a voluntary, no paid basis.

Sixty-Eight years ago businessmen and farmers had an idea for an event that would celebrate agriculture’s importance to the community. Thousands of Southwest Virginians attended the 1st Burley Tobacco Festival and Farm Show held in Abingdon October 18-20, 1950. Similar community fairs were held prior to 1949 in the Greendale, Bethel and Glade Spring areas. However, the Washington County Fair was the first county wide event and is the only event of this type presently being held. 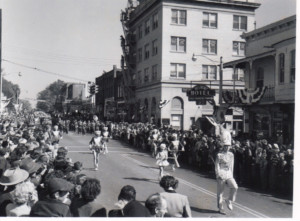 The first festival consisted primarily of tobacco, poultry, dairy and beef cattle, sheep, hogs and other agricultural displays. The early festivals were three day events climaxing with a parade, football game and dance on Saturday night. The first festivals were held in warehouses. Funds were raised by pre-selling football game tickets and from dance proceeds. The 1951 Committee developed what is thought to be the first budget, which totaled $5,000. A catalogue of premiums, events and advertising space was also sold that year. The first admission was charged in 1958; $0.25 for adults and $0.15 for children. Admission charges increased in 1972 to $1.00 for adults and $0.50 for children.

In 1956 the fair incorporated and became “The Burley Tobacco Festival and Farm Show, Inc.” governed by 19 appointed directors. In 1967 Miss America was the Parade Marshall and crowned Miss Washington County.

As the Fair grew, the directors began to dream and plan. Seventy acres of land was purchased in 1975 just west of Abingdon and financed by the owner to provide housing for the Annual Burley Tobacco Festival and Farm Show. The present fairground is an outgrowth of the Annual Tobacco Festival. The Board employed Virginia Tech to work on a long range plan for the Fairground in 1976. The Fairground Development Campaign Committee was formed in 1977 to raise $150,000 to construct a 45,000 sq. ft. exhibit building, develop roads and install utilities. One hundred thousand dollars was raised toward building and development of land. The operating name of the project was “Washington County Fair and Tobacco Festival.” 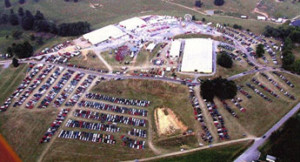 Each year brings more improvements to the fairground. In addition a new livestock building was constructed to house cattle, sheep and provide a place for livestock and sheep shows. Another building houses Old McDonald’s Farm and a petting zoo for children. Due to the Fair being extended to operate a full week in 1988, a carnival was added to recreational activities. A horse show ring and tractor and horse pulling track have been added to the rear of the property. Major changes were implemented for the Fair’s 50th year. A new 26,000 sq. ft. all purpose building, new roads, new entrance ways and fencing of the midway area were completed.

Year 2000, bathrooms were renovated in main building, a new office and restroom facility was built near the Events Building. Commercial, Educational, Youth and Adult exhibits continue to increase. Also livestock, goats, sheep shows are filled to capacity. Our heritage is to provide an agricultural and educational showplace and commercial opportunities for our community. Gate admission $7.00 Adults, $2.00 Children.

Several new events showcased at the 2001 Fair, Team Roping, Team Penning, School Day Tours, New Improvements included paving and lighting. The September 11 tragedy hampered our attendance, but we decided that we Americans would not be deterred by the terrorist. Due to the main building being too small, we held our first entertainment performance on an outside stage. Charlie Daniels was the performer. Crowd was overwhelming.

It was decided that 2002 Fair would showcase all entertainment on outside stage. Sawyer Brown, Percy Sledge, Ricky Shaggs were top performers. The Adult admission was increased to $10.00. Exhibits continue to increase. Construction was completed on the Washington County Agriculture Training Center, which consists of 2 buildings, show ring training facility (15,625 sq. ft.) and a 5,000 square foot meeting training facility. This added facility enhances our fairground. Gate receipts and attendance increased. Using the theme “Catch The Spirit” to stir the “spirit” of community, volunteerism and the “spirit” of America, Washington County Fair won First Place in State Competition at the annual meeting of the Virginia Association of Fairs, in Virginia. The Virginia Association of Fairs recognizes fairs in Virginia for their efforts to offer outstanding programs to their community and the communicate that to the public, Washington County placed first, second, and third in 11 of the 15 categories, which earned the Fair the first place Best Overall Communication Awards for 2002. Washington County Fair is truly recognition of the community.

The (2004) 55th Fair Theme “Building on Tradition” was showcased throughout the Fairground in exhibits and displays. Entertainers were Blue Country, Ricky Shaggs, Confederate Railroad, Eddie Money, Foghat and Trace Adkins. This was the first year we sold Reserve Seats for the entertainment section. Admission (Monday) Adults $8.00, Tuesday – Saturday Adults $10.00, Ages 6 – 12 $2.00.

“Stepping Out To The Fair” was the theme for 56th Fair 2005. Fair attendance continues to grow from the area and counties. Commercial, Educational Exhibits are very competitive.

The 62nd (2011) Fair theme was “Sew It, Grow It, Show It”. The Fair featured Cory Smith, Mark Lowry, The McClymonts, LoCash Cowboys, Satisfaction – Tribute to Rolling Stones and Jason Michael Carroll. The Fair was awarded “BEST OVERALL FAIR IN VIRGINIA” at the State Convention in January. 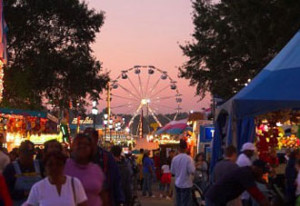 Washington County Fair Celebrates 68 Years. The Theme for the 2017 Fair was “All Roads Lead to Washington County Fair”. Ranch Rodeo and Team Roping were special Pre-Fair events. Fantastic Entertainment Line-Up to include Michael Tyler, Jo Dee Messina, Joe Diffie, Dylan Scott, Sidewalk Prophets, and the Georgia Satellites. Grounds act was Team Rock and Cole Shows were opened daily. Events include activities for everyone from Livestock Shows to Senior and School Day activities. This Fair is a great asset to our community. Washington County Fair was presented the award for the “Best Over All Fair, Attendance 30,000 and Over” at the Virginia Association of Fairs Inc. Convention. Ed Blevins served as President.

From a small beginning the Fair has grown to be a permanent and well recognized part of Washington County. Over 68 years of existence hundreds of volunteers have given their time and money to promote agriculture, rural living, agribusiness and support for Washington County through the Fair.